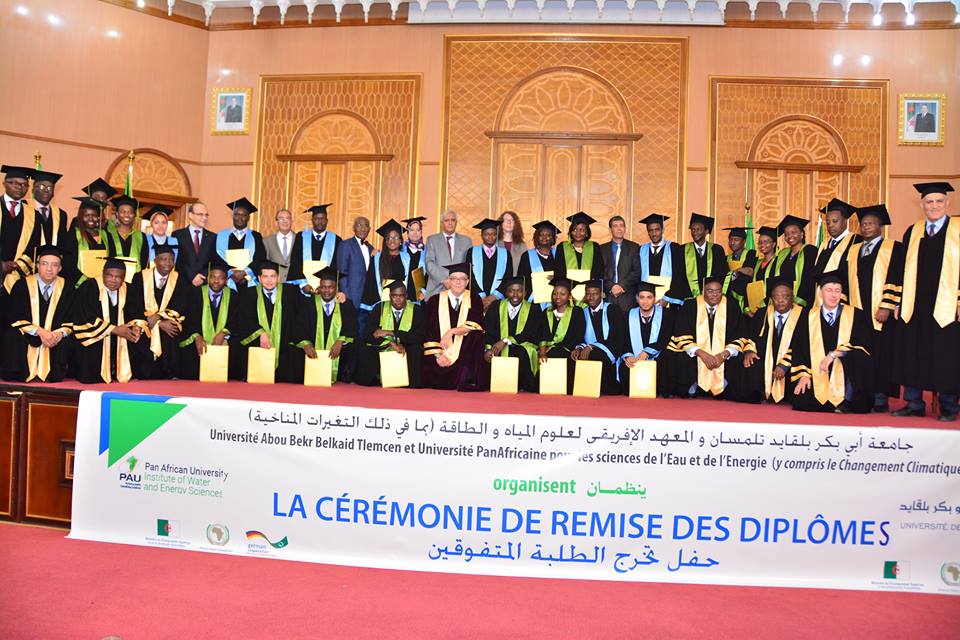 Pan African University of Water and Energy Sciences (PAUWES) played host to a high profile delegation from the African Union Commission and Algerian government today in Tlemcen. The delegation lead by of H.E Moussa Faki Mahamat, of African Union had Algerian Minister of Foreign Affairs, H.E Abdelkader Msahal as well as H.E Tahar Hadjar- Algerian Ministry of Education, all present. Others included H.E Micheal Peter Zenner- German Ambassador to Algeria and H.E Benyaiche Ali- Major of Tlemcen Wilaya Flanked at all sides to the podium were students, staffs and partners of PAUWES and the University of Tlemcen.
Welcoming the delegation, was an Arabic introduction by Omar of Water Policy after which Beningne (AUC student Rep) thanked the delegation for their support to PAUWES especially the host country-Algeria and the University of Tlemcen for accepting and accommodation PAUWES.

H.E Moussa Faki Mahamat in his address congratulated Prof. Zerga for steering the affairs of PAUWES to higher heights. Honorable Faki, encouraged students to bear in mind, they are representative of their respective countries and Africa as a whole and as well the future hope of this continent as far as growth and development is concern “for me, PAUWES is an opportunity for African students to learn”- he concluded with.

Director of PAUWES, Prof. Zerga, recounted the success story of PAUWES in his speech. He acknowledged the work of PAUWES Entrepreneurship Club which is a club that promotes and nurtures ideas of students from various fields of studies. Prof. Zerga hinted on the expansion of the club to all Pan African Universities sometime soon. Prof. Zerga also highlighted on the speedily works on the permanent building of PAUWES which was progressing at a galloping rate. He also touched on gender equality as a focus of PAUWES as far as students intake is concern. “30% of current students are females; we plan to increase this number this year with 70 students expected to be recruited from various part of Africa for 2018/19 academic year”-He revealed.

The delegation took time to interact with PAUWES CoP, WASCAL Coordinators, Entrepreneurship Club and GIZ partners to stay abreast with their level of work and progress before signing off.
Students of clothed in their beautiful traditional apparels signaled their joy and pleasure in meeting such a delegation.